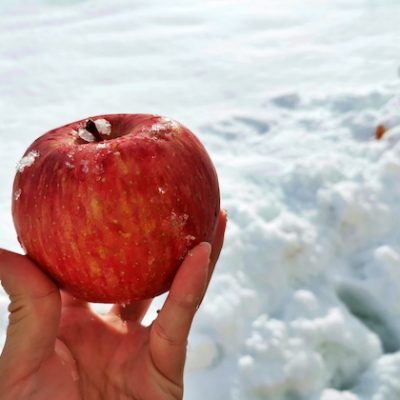 The story of the birth of Yamagata’s rare snow apple that makes you want to shout “yum”!

‘Snow apple’ from Asahi-machi, Yamagata Prefecture, Japan.
Asahi-machi’s bagless Fuji apple (a Fuji grown without wrapping bags, characterised by its high sugar content and high acidity) has gained recognition in recent years, but have you ever heard about the ‘snow apple”?
‌
Actually, the ”snow apple” is the apple that has been preserved over winter by burying the bagless Fuji apples in snow, which our consumers have told us are the best tasting apples in Japan.
‌
Only selected apples from Asahi-machi apples, which account for less than 1% of the national shipment, become snow apples. Their rarity, combined with the freshness and taste of apples preserved for a long time in the snow, caused a huge panic in the local area when long queues formed on the first day of sales in mid-April, with people waiting up to three hours to purchase them, and even causing heavy traffic jams.
‌
It is a very rare apple that snow apple lovers would kill to get their hands on.
‌
This article introduces how the snow apple is made and the background behind its production.
‌
After reading this article, you too will certainly want to eat snow apples. 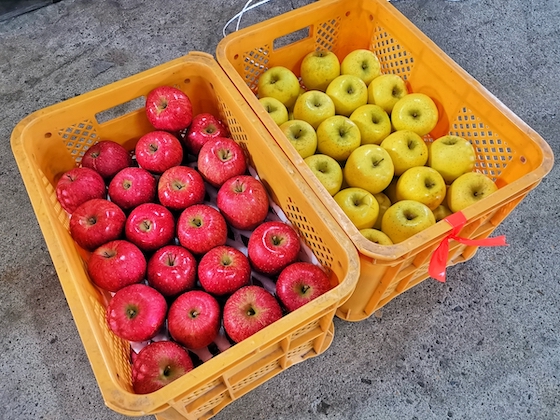 The snow apple story started by one farmer

Mr Shido is the chairman of the Snow Apple Research Association. He is the farmer who started this snow apple business all by himself. We asked him why he started.
‌
“I wondered what we could do with the snow left over from the annual June festival at the Kuki Shrine. ……. Maybe we could bury the unbuckled Fuji from Asahi-machi that we offer to the shrine.” 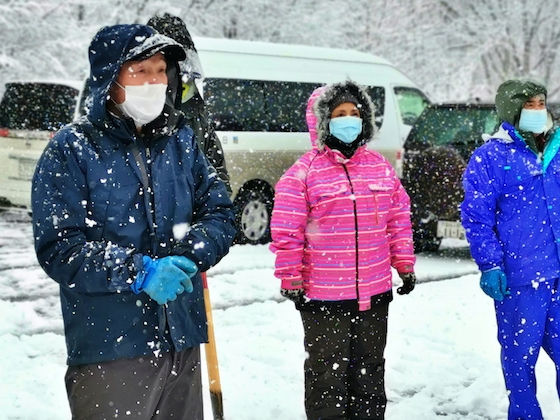 That is how snow apple production began, which continues to this day. The Kuki Shrine is a shrine with air as its sacred body, which is unique in the world, for remembering the blessings of the air. The shrine is located at an altitude of 600 m above sea level in Asahi town, so the snow in the surrounding area remains until early spring. 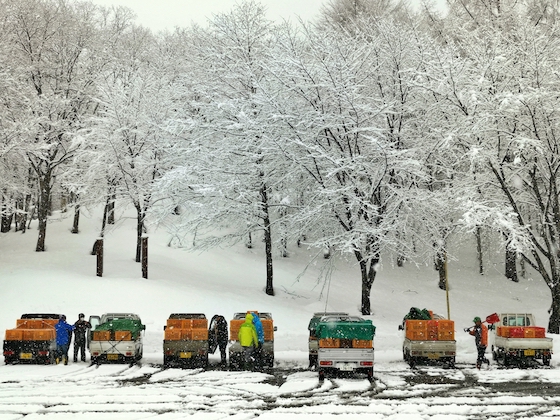 Producers gathered in the parking lot of the Kuki Shrine on the day of burial.

The snow apple initiative was originally started to bury the autumn harvest in snow so that the apples could be preserved until the festival in June, but in recent years, due to mild winters and climate change, the remaining snow is only available until mid-April at best.
‌
They couldn’t keep it until the festival, so they decided to sell it. This is how the snow apples were born, a springtime delicacy that has been on sale at the roadside station Asahimachi Apple Forest for several years now, creating traffic jams and bustling activity.
‌ 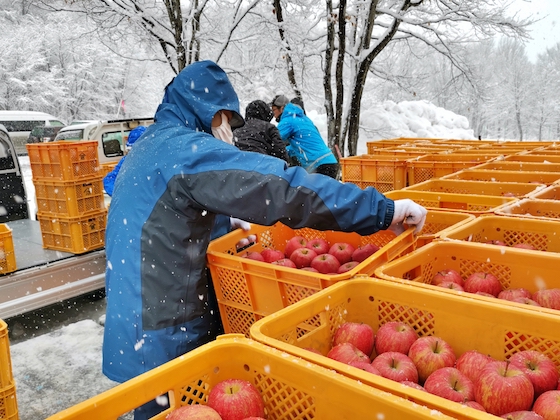 Producers work together to place apples on the snow base

However, the road to this point was not a smooth one.
‌‌
Although he started on his own, he did not have the know-how, knowledge or experience, so it was a constant process of trial and error. The apples were eaten by animals in the snow, the weight of the snow crushed the apples, and all the apples were crushed in every container…… 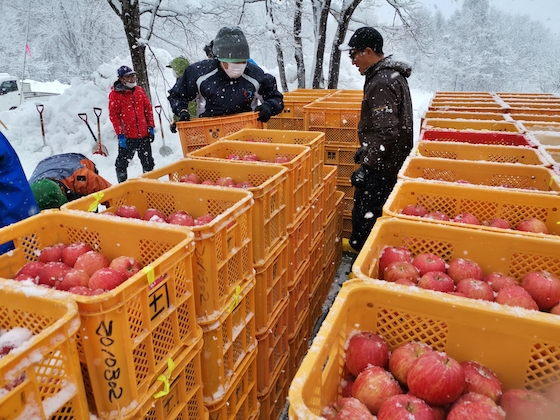 Even with all these failures, the number of fellow farmers has gradually increased. In apple production, they had a network of other growers. He told the neighbourhood around him about snow apples and gathered friends to take up the challenge with him.
‌
Finally, with a gradually increasing number of friends each year, and with a series of challenges each year, they have finally arrived at a stable snow apple production. The ingenuity of the farmers can be seen everywhere, as they have built a solid snow base about 1m from the ground and put up nets to prevent animals from eating them in the snow, and laid down plywood panels so that they won’t be crushed by the snow, all based on their past failures. 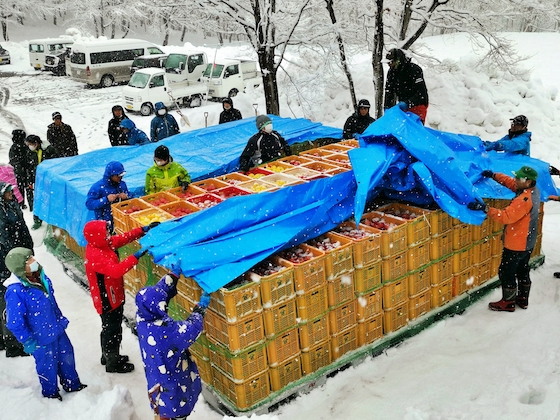 Netting, covering with sheets and laying down the plywood

Now, more than 15 farmers have come together, each bringing their harvested apples and burying about 600 cases of containers at a time in the snow. They share the joy of seeing their apples again in the spring. 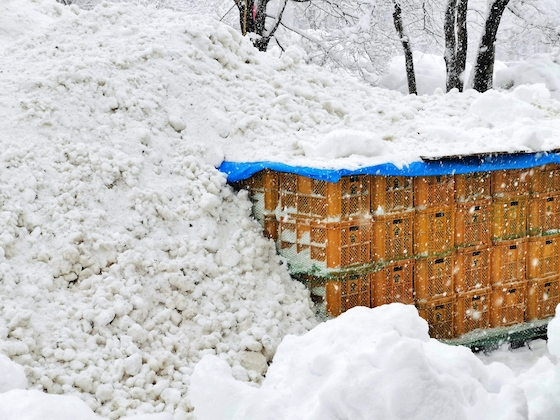 Cover with snow to overwinter in the snow until spring

Asahi town’s unbagged Fuji apples are tasty enough to eat in season from November to December, but by taking the time and effort to preserve them in the snow, you can enjoy fresh, tasty apples in April, when they are generally out of season. It is the ultimate in luxury, isn’t it?
‌
The Asahi Town apple has developed its quality over a long period of time. The knowledge and experience accumulated by our predecessors has been passed on to us, creating new values in the form of snow apples. 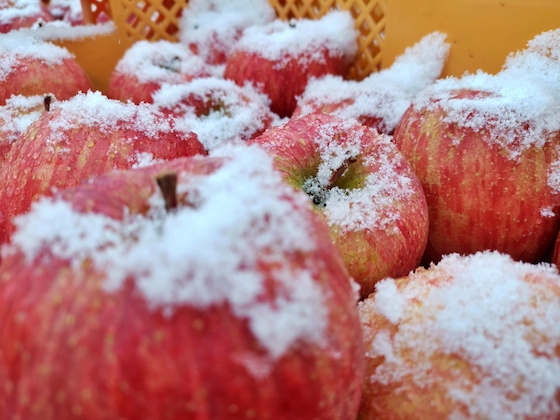 The Snow Apple now overwinters in anticipation of the day when it will be reunited with the growers who nurtured it in the snow. 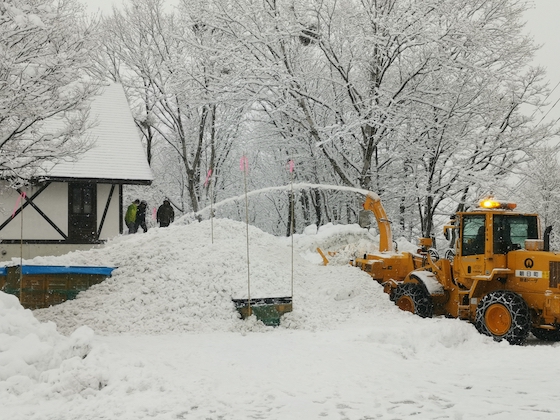 It was freezing, but I enjoyed watching it from start to finish……

They have only been sold at Roadside Station Asahimachi, but now the Asahimachi Tourist Association and our DMC Tendo Onsen are collaborating to organise a ‘snow apple digging experience’! 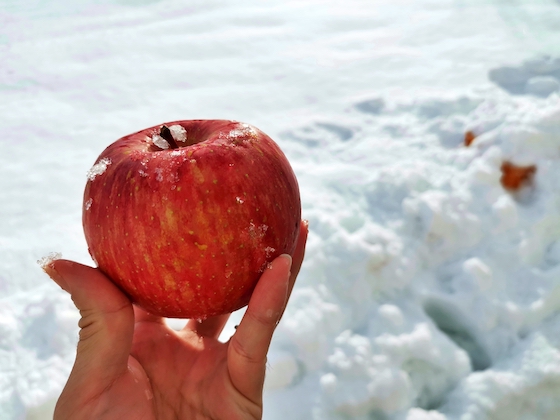 Snow apples opened in April are re-buried in the snow space for the experience and three snow apples are dug out; two are taken home as souvenirs and one is used for the snow apple juice making experience on the spot.
‌
It’s not often that you get the experience of drinking 100% perfect apple juice right in front of you, and of making it yourself, is it? Plus, they deteriorate so quickly so the expiry time is ”seconds”! In return, the freshness, sweetness and taste are exceptional.
‌
We are also considering a set of snow apples that can be purchased exclusively by the participants of the experience. If used in addition to the experience, you can eat the snow apples that we have introduced here.
‌
It is fun for adults and children alike, so come along as a family. (Of course, we also welcome couples and friends.)
※ Experience tour in preparation